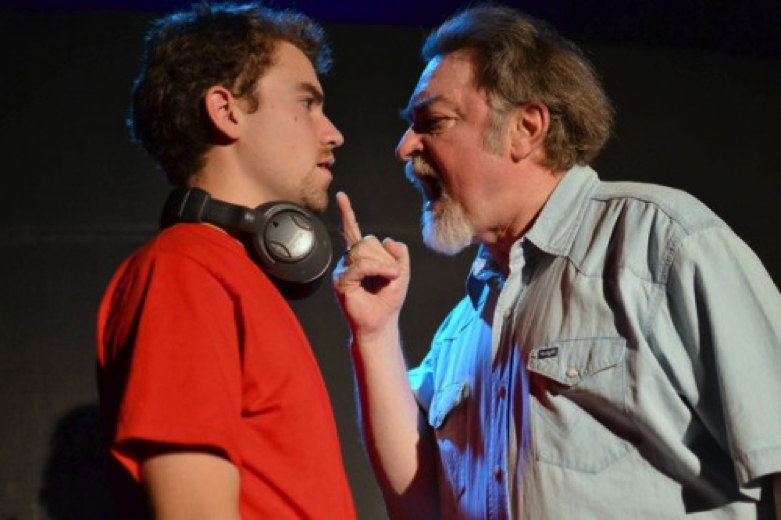 If you’re a Baltimore theater person, you should go see Load Of Fun Theater’s current production of Hired Gun, produced by Theatrical Mining Company, part of this year’s Baltimore Playwrights Festival. For several reasons. The first is that it’s really good. More on that in a bit. But also, it’s important to support our own, and the Festival is about as local as it gets. For thirty-one years, the BPF has nurtured local talent and given them a chance to see their scripts come alive, as well as given directors, actors, stage managers, designers, etc. to work with material no one has ever worked with before. As an actor who has done two Festival productions, I can tell you that’s a real thrill.

Now, back to the “it’s really good” part. The play is written by Mark Scharf, and it is one of the most tightly-written we’ve seen from this fixture in the Baltimore theater scene. It’s the story of Dewitt (last name isn’t in the program and I don’t remember it), a has-been rock star who is planning a comeback, although he says that’s not what it is because he’s never been gone. He’s “the King,… the Fat Man of Rock ’n Roll.” Dewitt hears a young guitar player whom he believes has the best left hand he’s ever heard. He’s got to have this boy play for his upcoming release. He is the only one who make this project work. Yes, Dewitt is dangerously fixated. The boy, Jesse, agrees to play for him, but Dewitt is never satisfied with the tracks he lays down. Dewitt’s third or fourth wife, Sherri, tries desperately to keep him focused while keeping Jesse safe. Then there’s the best friend/crony, Red. In high school, he saved Dewitt from having his hair cut off by beating up the entire gang who had him cornered. Dewitt has kept him by his side ever since then and Red has made no move to break away.

The production has one of the best openings I’ve ever seen. It’s two second-long tableaux of Dewitt soaking in the accolades of an adoring crowd. It wouldn’t work if Charlie Danforth’s lighting wasn’t perfect, and let’s acknowledge Kenyon Parson, too, who actually works the controls. And Dewitt is perfect and the direction by Stacy Bonds is crisp and clean, so in two seconds, we’re drawn completely drawn in.

Another Baltimore theater scene fixture (this production has several), Rodney Bonds, plays Dewitt. He’s does a wonderful job, even if he is a bit svelte for someone called the Fat Man. He’s got a belly, but not much more than your average middle-aged man. It works, though, because Mr. Bond captures the attitude of Dewitt perfectly. And as the play proceeds, he allows Dewitt to slip further and further away from reason and sanity.

The play is written by Mark Scharf, and it is one of the most tightly-written we’ve seen from this fixture in the Baltimore theater scene.

Red is a difficult role to play. There has to be more to him than the faithful sidekick, but the actor is more or less on his own with that. Mike Ware (told ya) does a good job of it. You can believe that he has no life outside of his idol, who is devoted to him because of that high school “rescue.” Now, the diction was not good most of the time, so I may have this wrong. Maybe Red saved Dewitt’s life, not just his hair.

The play opens – after the tableaux – with Jesse arriving at Dewitt’s home and Sherri doing everything she can to get him to leave. She doesn’t warn him or anything. She is controlled and snide, but clearly wants him gone. The first thought is she’s jealous. We come to see, though, that she already knows this is going to end badly and just wants to protect the boy, and probably her husband, too.

Jesse starts out telling Sherri he is not interested in putting his own blossoming career on hold, so she is surprised when he accepts the job. But hey, playing with a legend looks good on a resume. Trouble is, Jesse outshines the legend at their first live performance. Later, when he put down tracks “good enough” for Dewitt, Dewitt will not allow him to even rest – literally – until he gets what he wants from him.

Maybe Jesse truly is not up to his normal standards. But maybe Dewitt is terrified that his resurgence won’t work and this is his way of making sure it never actually happens. Or maybe he’s got an unreal expectation. We never know for sure.

Now, Sherri is the sister of the late great Matt (Somebody) who died when he crashed his car while driving drunk. He was connected to Dewitt somehow, but whether I lost it in the poor diction or it’s a hole in the script, neither I nor my companion knew what the connection was. We do know that Sherri blames her brother’s decent into the bottle on Dewitt. Which kind of colors her decision to marry this old man, doncha think?

Sarah Eberhardt as Sherri stepped into the role only two weeks ago, but she’s the stand-out performer from the start. She’s entirely believable as the cynical, maybe even a little bitter, young wife of a legend-turned-burnt-out-drunk. You know she can control him, and you can easily see her shaking her head and dragging Dewitt off bed when he drinks himself into a stupor, which he does regularly. That she is unable to influence his behavior as the play progresses is part of what’s scary about it. Ms. Eberhardt was a little shaky on lines from time to time when I saw it, but the character was fully there, and she’ll probably be letter perfect by the time you see it.

Director Stacey Bonds (Rodney’s daughter-in-law) does a great job of capturing the frustration and futility of the play. Along with set designer Bush Greenbeck, she creates a claustrophobic feel, like none of them are ever going to get out. Staging a rock concert on this tiny stage should be problematic, but she handled it beautifully. There were things missed, though. For instance, a climactic scene between Sherri and Jesse lacked the poignance it should have had. But overall, the direction was very good.

Running time: 90 minutes with one intermission

The Theatrical Mining Company’s production of Hired Gun plays through July 28, Thurs–Sats @ 8; Sun @ 2, at Load Of Fun Theater, 120 W. North Ave., Baltimore, 21201 Note: The door is not where the sign is, and the theater is very warm. For tickets, order online.