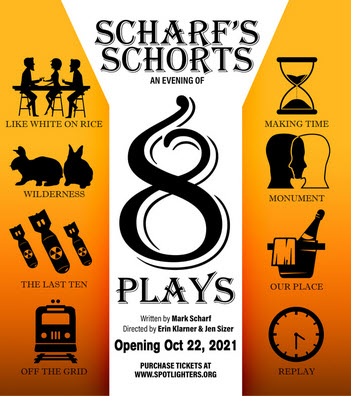 Add another Baltimore stage to the growing list of “post-COVID” re-openings. The pandemic is not yet over, of course, but thanks to thorough precautions and a brand new HVAC system, Spotlighters is back with a season of in-person theater. Their first offering is a yummy buffet of short pieces by crowd favorite, Mark Scharf, called “Scharf’s Schorts” [sic]. It features eight plays, two directors, seven actors, and a really interesting palette of contrasting yet connected themes.

…a wonderful package of theatrical treats to kick off Spotlighters’ season.

“Monument” opens the show. In it, we meet a roofing contractor (Nick Cherone) and his customer (Sean Eustis). Scott, the roofer, is a perfectionist craftsman whose personal connection with his client allows him to open up about his work. “It’s better to fix things than to throw them away,” he tells us, and we know he’s talking about more than slate shingles. At 16 minutes, “Monument” is the longest play of the show, with a didn’t-see-it-coming reveal near the end. It’s worth noting that the piece also includes the smoking of herbal cigarettes. The new air filtration system at Spots is top-notch, but for a short time the smoke is definitely pungent in the house of the small space. Cherone’s performance smolders too, with exuberant vitality and a decidedly three-dimensional take on the qualities of those who work with their hands. Director Erin Klarner, author Scharf, and Cherone all give us really lovely work here.

Next up is “Our Place,” a heart wrenching story of Vince (Glen Charlow) and Christine (Terri Laurino), an aging couple who are struggling with a growing distance between them caused by Alzheimer’s. Hoping that familiar surroundings will reboot Vince’s memory, Christine brings him to their favorite restaurant. Speaking in half-sentences, Vince mentally comes and goes at times (Charlow navigates this simply and beautifully), while Christine has a whole lot of heavy lifting to do. Eventually the emotional burden overcomes her. Laurino’s delivery is a gut punch, and again director Klarner coaxes out-of-the-box performances.

“Like White on Rice” is the shortest play, at eight minutes. It’s also more of a wordplay exercise than a play as such. Here, Scharf challenged himself to create a script in which every line of dialog is a cliché. It’s a clever idea, and also a herculean task for director Jen Sizer and her cast (Cherone, Mike Papa, and Beverly Shannon) to create a semblance of plot. This is the only play in the show that isn’t a two-hander.

“Wilderness” closes the first act. Charlow returns as Martin, a reluctant representative of his cul de sac who’s come to visit neighbor Spencer (Sam David), whose yard has become unruly and overgrown. Klarner gets wonderful performances from both actors here, as what could be a predictable conflict is anything but.

The second half of the evening begins with “Replay,” also directed by Klarner. Papa and Eustis present a couple whose relationship may or may not recover from toxicity and manipulation. Both actors portray pain of intense depth, as Scharf’s dialog gives them very juicy material with which to work. These are Eustis’ and Papa’s finest performances of the production, in a play which could easily be stretched to a full one-act.

“Off the Grid,” directed by Sizer, is an emotional reset for the audience. In it, Laurino plays Maddie, a homeless person encamped at a subway escalator while busy, yuppie passerby Katherine (David) is at first annoyed but then engages with them. This piece is built upon a very simple premise, and like “Wilderness,” could have followed a predictable path, but Scharf’s writing here breaks with convention and is very, very funny. David plays exasperation with just a twinge of human insecurity, to great effect. Laurino, meanwhile, is simply enormous. Her physicality is such a joy to watch in this role that one risks missing some of her equally fine vocal work.

Following a longer transition for costume change, “Making Time” brings Laurino back to the mass transit system—again as a sort of everyperson on a mission to confront. Her foil this time is Jeff (Cherone), a troubled young man with a secret. Cherone contrasts his sparkling delivery in “Monument” with great subtlety here. His nuanced work in this piece includes a brave willingness fully to emote with his eyes shut at times (it works). Laurino whiplashes herself from the previous piece into a role that she plays with straightforward compassion and honest dignity. Sizer’s direction is deceptively simple and very effective.

Speaking of time, the final play, “The Last Ten,” directed by Klarner, concerns the idea that we all have only ten minutes left to live. ICBMs are on their way, and Peggy (Shannon) and George (Eustis) are trying to come to grips with the situation, themselves, and each other. There’s a tiny bit of “Dr. Strangelove” sarcastic pathos going on, and probably the single best joke of the night (delivered with timing perfection by Shannon). As hard as it might be for a playwright to stuff a fully realized story into ten minutes, these characters are challenged a thousandfold. George chooses confession (with head-scratching hilarity) and defiance. Eustis is both very real and very funny. Peggy begins her final moments with a shrug, and grows towards tenderness. Shannon’s work is superb.

One wishes there were some racial diversity in its casting and/or creative team, but aside from the all-white nature of the production, “Scharf’s Schorts” is a wonderful package of theatrical treats to kick off Spotlighters’ season.

Running Time: One hour, 47 minutes with one intermission.